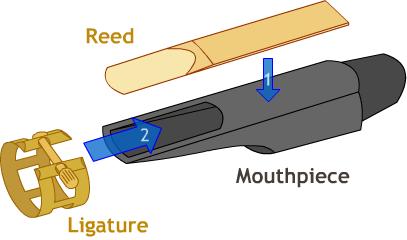 It’s not this yet…

Way back in July of 2012 when I started this blog I spent my third post discussing what I thought was the most important part of any player’s setup. It wasn’t the mouthpiece or the reed or the horn in case you never read it. You can read it here in its entirety or I can just spoil it for you and tell you…it’s your concept – but read the post anyway. 🙂 It’s finally time to talk about the second most important part of your setup and once again it’s not your mouthpiece or your reed or your horn. After your concept comes your physical makeup.

There’s a lot to this really as so much of your body is involved in playing the saxophone. One key element is obviously your lung capacity and your ability to deliver your breath in a controlled and predictable fashion. Connected to this is your ability to open your throat (or constrict it in an interesting way to make certain tones and effects). Also connected would be your diaphragm and how you use it to control the pressure of your tone production system. Other factors can affect the system as well such as your posture and how well you understand how the system works.

Another area that has a lot of effect is your mouth, embouchure, and oral cavity. Of course your embouchure is important for many reasons but many people ignore some important factors like how the size of your oral cavity (including how open your throat is) works as an extension of the cavity inside the mouthpiece (which is part of the geometry of the whole system). This is one of the big reasons why different people sound different on different mouthpieces and why some guys sound dark with a high baffle mouthpiece and other guys can sound quite bright on large open chamber mouthpieces with very little baffle. In addition, minor differences in tongue position can angle (or block) your airstream in such a way that enhances or negates things you are doing in other areas.

There are other factors that have an influence as well. Your physical size and strength will probably go a long way towards choosing what saxophone you should play for instance. Also, I discussed critical listening in that post and several others since then. Obviously your brain is responsible for deciphering the inputs but your ears are what gets the information to your brain. On a meta level, it’s important to make sure that the information gets in there as clearly and cleanly as possible and that’s why I use in-ear monitors and try to protect my hearing as much as possible.

Some of these things you can’t do anything about but they are just part of the equation and don’t usually prevent you from getting the sound you want. Other factors like your embouchure, breath support, tongue position, ear training, etc. can all be trained and are usually more than enough to compensate for any potential deficiencies or shortcomings in other physical areas. One of these days we can actually start discussing those mundane things like mouthpieces and reeds but I would hope that thinking about your concept and your physical makeup as being more important would keep you from dwelling on hardware like so many sax players do. It’s more important to use what you have and continue to hone your craft than it is to spend tons of time and money chasing after some elusive hardware combination.

I got thinking about this stuff again because I was at a rehearsal for a gig I have coming up this weekend. It’s a new band for me and a different horn section including a sax player I have never worked with before named Scott Young from the DC area. Scott has had a long and fruitful career and is a consumate pro. After rehearsal we stood outside and talked shop (you know mouthpieces and stuff) for quite a while and it struck me how long it had been since I did that…it was a blast. 🙂  I’m really looking forward to working with Scott this weekend, talking more shop, and hopefully playing more gigs together in the future. If you’re in the Bethesda, MD area on Friday come on out to Bethesda Jazz and Blues Supper Club to see Jr. Cline and the Recliners featuring Julia Nixon.