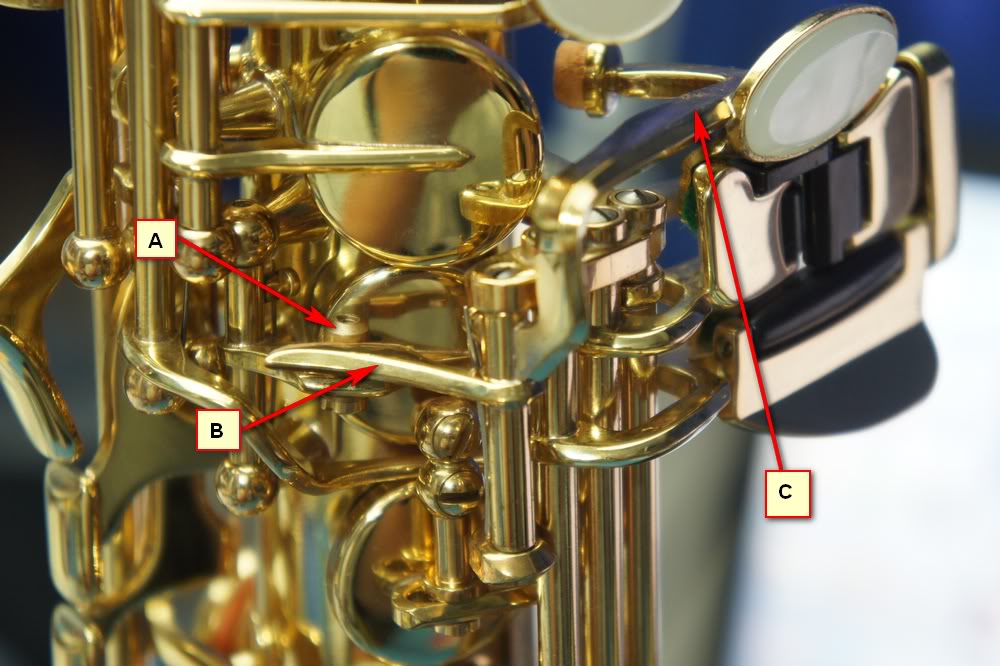 I had a rehearsal on Saturday and I was having a devil of a time with a sticky G# key.  I’ve had similar issues over the years but never to the extent I had on Saturday.  It definitely didn’t help that it was the Steely Dan tribute band I play in and all of the songs practically required a G#…especially the ones I solo in.  Even when it was opening it was delayed so it was very trying.  None of the tricks I have used in the past worked so I learned a few new ones that I will explain here.

In the past, I have always had luck using the “dollar bill trick”.  You take a dollar bill and place it between the pad and the tone hole, apply gentle pressure on the pad cup and then slide the bill out.  The paper of the bill helps soak up moisture and clean the parts and the oils of all of the people’s hands that have handled the bill (GROSS!) helps keep it from being sticky.  The problem was, I really couldn’t get in there with the bill to clean it.

What I have done instead is clean the pad and tone hole more completely.  I asked several repair guys including my regular guy Lee Lachman and my internet acquaintance Stephen Howard.  Both had similar solutions involving the use of a mild solvent.  Lee suggested a product called Goo Gone that he’s had a lot of luck with and Stephen suggested simple lighter fluid like you would use in a Zippo lighter.  I think the key is a light solvent that doesn’t have a lot of other stuff mixed in to muck things up. I ended up finding the lighter fluid quicker (at a local drug store next the the Chinese restaurant where I was getting take out) and it was pretty inexpensive so I gave it a try. I put a little bit on the end of a Q-tip and lightly scrubbed all around the areas where the pad and tone hole come into contact.  The effect was immediate.  No more sticky pad.

I also learned a trick that’s been around for years, but had somehow eluded me, for letting the pads dry out without contacting the tone hole.  If you take a business card or a lightly folded piece of paper and stick it under the low C# key it also slightly opens the G# key. In this fashion the G# pad can dry out without creating a seal.  It seems to work like a charm and I believe it’s perfectly safe.

Of course, I also swab the horn every time I use it and I use a pad saver as well. One thing I also learned in the last year is to open the case and leave it open overnight after getting home from a gig (removing the pad saver).  It seems like a lot of moisture remains trapped in the case even after swabbing if you don’t do this.