Since just before Christmas I’ve had the opportunity to play live with four different big bands in just over three months. I know for some people that is not a lot of work but for me it’s probably more big band work than I’ve done in ten years or more. Many years ago I used to do lots of big band work but there’s just not that much call in my area anymore. I mean, I could probably play with a different rehearsal band every night but I can’t do that for many reasons and I like to have something to work towards rather than just always rehearsing towards no gigs. (First two photos in this post are courtesy of Chris Convery. Chris is a great guy, and excellent trombonist, and an awesome photographer)

I have done every one of these since the concert series started about a dozen years ago. I think we’ve had two cancelled for inclement weather over the years but all of the ones we have had have been incredibly fun and over the years we’ve helped collect a lot of toys (an unwrapped toy is the cost of entry). The band is fronted by Ken Ebo who is in the marines and teaches at the school of music. He’s an amazing trombonist, singer, and arranger. We do Christmas music from Stan Kenton (with actual French horns), Harry Connick, Gordon Goodwin, Tom Kubis, and other notable writers, arrangers, and band leaders. We have two singers (including Ken, who does an amazing job on Harry Connick tunes), a color guard, and even Santa Claus makes an appearance at the end of the show. 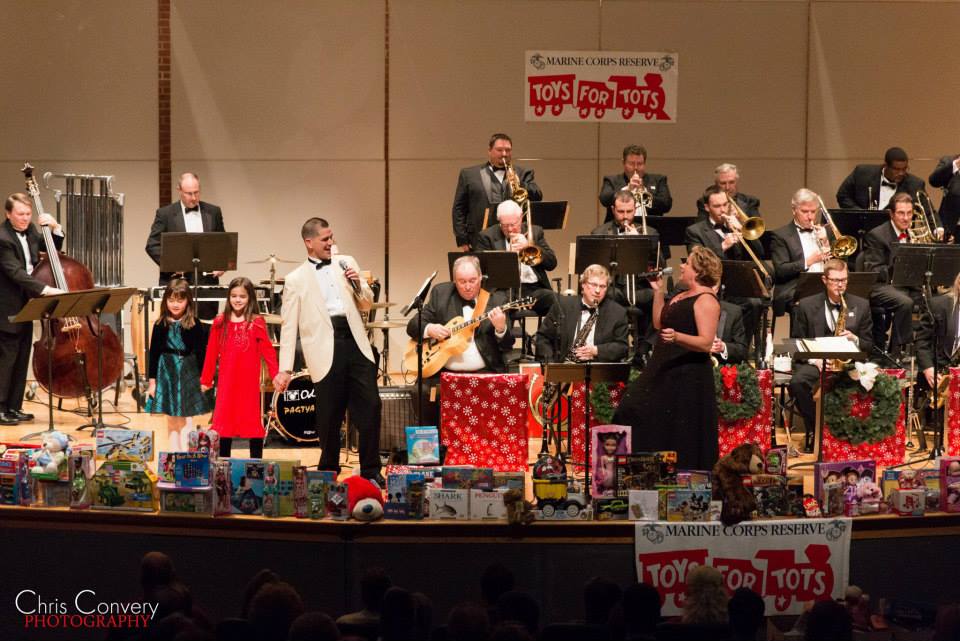 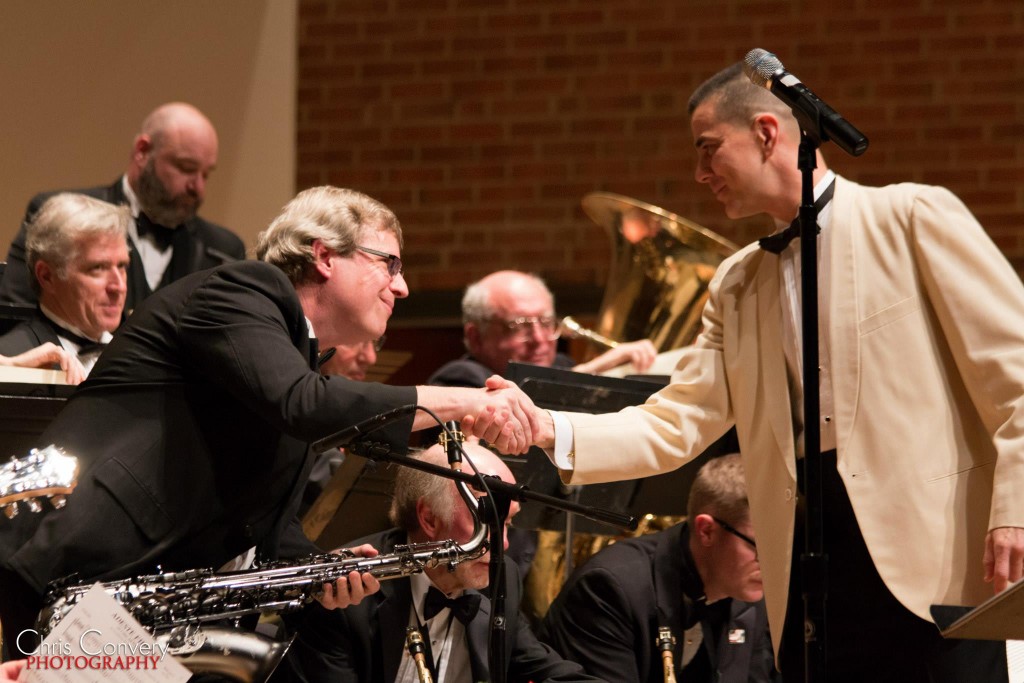 Ken and I after my feature – Christmas Time Is Here

In January, I had the honor to play in a big band backing up the amazing and timeless Bobby Shew. Bobby came to Towson University as part of the Towson University Jazz Festival and they put together a Jazz Festival Orchestra made up of local pros and former TU students and alumni. For the record, I was a student at TU for several years but ended up getting my degree elsewhere.  First and foremost, Bobby was amazing both as a player and as a person. Second, we had the additional honor of having Denis DiBlasio (baritone saxophonist, clinician, performer, and alum of the Maynard Ferguson band) join us for a couple songs. Finally, the band was absolutely smoking. This was made even more interesting/fun because we did all of it with only one rehearsal. We got the music ahead of time and were just expected to know it. We had about an hour before Bobby got there and then an hour with him. There were a couple weird issues with tempos that were incorrectly marked on the parts but overall it went very smooth. I felt crazy old because all the other saxophonists were half my age but they were very gracious and played their butts off. #whippersnappers 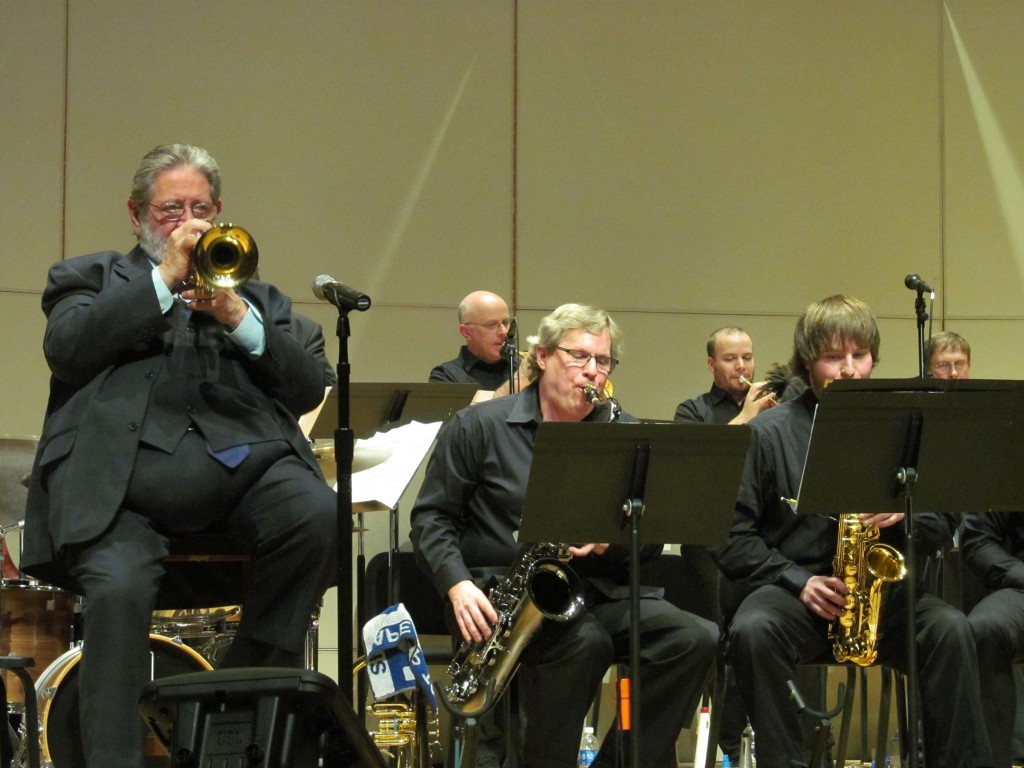 Recently, a new movie was made called Whiplash about a drummer’s experience playing in a college big band with an abusive and demanding band director. I’m not going to go into too many of the specifics of the movie except to say I don’t necessarily agree with the portrayal even though I thought the acting was impeccable. That said, one of the interesting things about the movie for me is the title and the big band chart to which it refers. Whiplash was written by my college jazz band director (Towson University – see above), Hank Levy, for the Don Ellis big band and it’s a chart that I played extensively in my college career as well as post college in some incarnation of the Hank Levy Legacy Band. I could probably go on for a long time about Hank and his writing but I will save that for another post possibly and simply say that Hank loved to challenge the norms of the time (the 70’s to the 90’s) and one of the ways he challenged them was by writing “time” charts – using odd meters. For example, Whiplash is in 14/8. He also was nothing like the character portrayed by JK Simmons in the movie…quite the opposite really.

Anyway, I had the chance to sub with this band at the Bethesda Blues and Jazz Supper Club a couple months ago and I’m actually playing with them again this Sunday at Towson University. Playing these tunes is like revisiting an old friend. While odd meters can be challenging at first, it becomes as second nature as more “normal” time signatures once you wrap your head around it. The problem isn’t really reading and interpreting but soloing can be a bit of a mind bender at times. Luckily, Hank was always very good at subdividing the bars into patterns of 2’s and 3’s (sometimes the 3’s are further subdivided in half but usually only on the slower stuff) and keeping those pulses in your head makes it easier to stay in time. Also, being a sub I only have to worry about soloing on a couple tunes and both of those are in 4 so I’m set. The concert is a guest artist spot and all of the proceeds benefit the Hank Levy fund at the University so come on out if you are in the area.

As I said, I generally need to stay away from long rehearsal cycles (or more than a 2-1 rehearsal to gig ratio) but there is one noticeable exception that I will talk about more in depth in my next post.