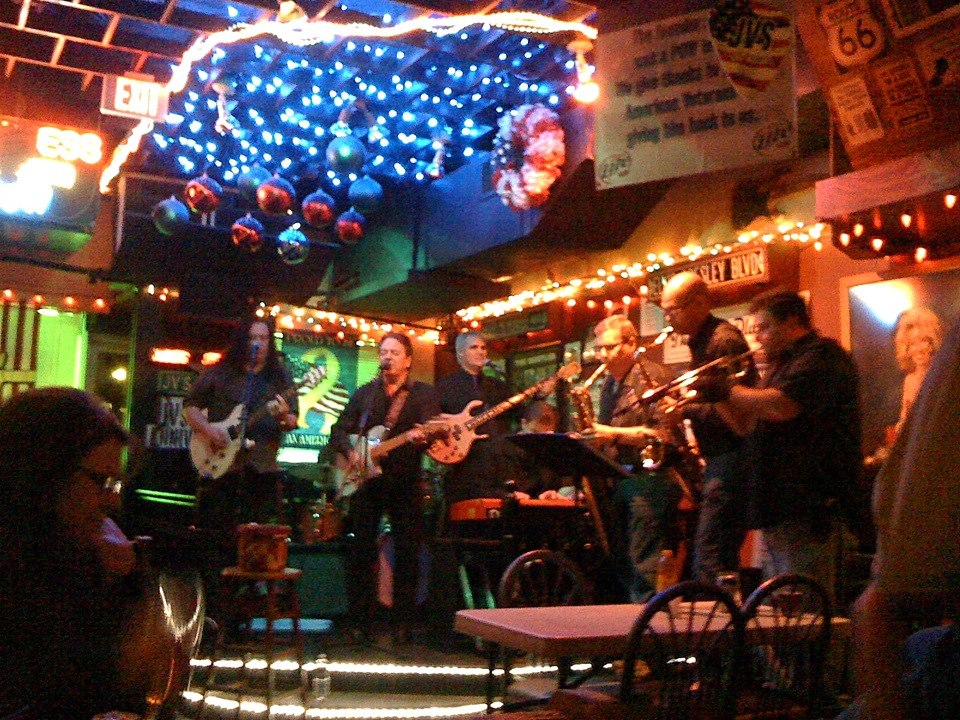 I played a great gig Saturday night in Falls Church, VA with Jr. Cline and the Recliners.  I had played with them on tenor before Christmas but this time I was playing bari as Daryl (Jr.) was trying a few things with the horn section.  It was a much easier gig on tenor for a couple reasons.  First, the book is a Bb book so I was trying to sight transpose everything…sometimes it felt easy and natural and other times it felt like calculus…mostly calculus.  Second, the club is tiny (same club as the last gig I did with them) but this time we had three guys on the tiny stage instead of two. Finally, there were no monitors and the bari is much harder to pick out acoustically than tenor so I was never really settled with regards to pitch or blend. On the other hand, the section from last time was augmented by a wonderful guy and great sax player named Al Williams on tenor. Al has been a Washington area legend for years and previously toured with both Stanley Clarke and Mongo Santamaria so it was an honor to share the stage with him and blend in the section along with trumpeter Chris Hutton.  I’m hoping there will be more work with this section and this band in the near future.

I took my son (who plays string bass in high school) to the All-County Solo and Ensemble Festival on Saturday.  He was playing with a trio that ended up getting a top grade but that’s beside the point. 🙂  While we were there in the warm-up area I saw not one, not, two, but three sax players that had Rovner ligatures on upside down. I really wanted to go say something but I figured the last thing they needed was someone messing with their setup before they play so I must content myself with posting this thought here. It’s pretty simple really. The ligature screw always goes on the right unless you have doe something special to put it on the other side so that gives you a clue as to how the ligature should be applied. It’s not a matter of the vast majority of people in the world being right handed, it’s actually much simpler and aplicable than that. Having it on the right allows you to be able to play some notes with your left hand while possibly adjusting the tension with your right. If you reverse this then there is only one note that will sound…C#. Also, in the case of the Rovner ligature, if you put it on upside down you are losing the whole point of why you would by a Rovner in the first place. So think about it and make sure you’re using the ligature you bought the way it was intended to be used.

Now that I have more bari work coming in, I’m starting to mess around with my setup a little bit. I have a mouthpiece that I love (Lawton 8*B – you can see it pretty clearly in the pictures above) but it’s been a little tougher to play since I haven’t been playing as much bari and I’m not 25 anymore so I was hoping for something a little easier to play. One possible solution is that I have an Otto Link Tone Edge (Hard Rubber) out with a mouthpiece guy named Phil Barone and he’s giving it something I refer to as the “Ronnie Cuber Treatment”. It’s a series of modifications he did for Ronnie years ago (Ronnie is one of my favorite bari players). I’m thinking it’s going to be easier to honk out low notes and it should be freer blowing than the Lawton. Unfortunately it has taken quite a while to get those modifications but I’m hopeful it will be coming soon. I have also contacted another mouthpiece refacer who specializes in bari mouthpieces although he works on all types. His name is Keith Bradbury but he goes by the name MojoBari or simply Mojo on forums. I have a couple of mouthpieces that I want to send to him for refacing and I’m going to start with an old hard rubber Berg Larsen 115/1. It’s got a couple things I like (honking low end and easy to blow) and a couple things I hate (stuffy upper register) so I’m hopeful Keith can straighten it out for me. He’s a little backed up so it will probably be a month before I get it back but I can definitely gig on my Lawton for a while longer and, who knows, maybe I’ll just get comfortable on it again from all of the work I’m hoping to get and it won’t feel too big anymore.  Stay tuned for updates.

I've been playing the saxophone professionally for over 30 years mostly in the Baltimore/Washington DC area. I've been through a lot of trials and tribulations trying to learn and play this wonderful instrument and my hope is to pass some knowledge along to others and maybe save them some of the trouble. At the very least I want to give you some things to think about even if you do something different or disregard what I say completely.

View all of Barry's posts.