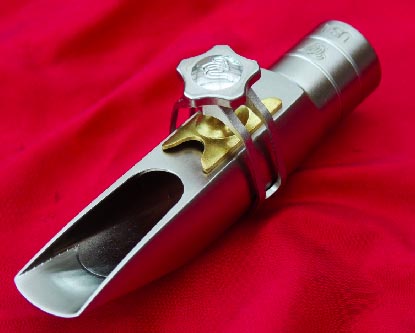 I’ve talked before about mouthpieces from Phil Engleman. I wrote a review about one of his Equinox Dark mouthpieces and one of his original Custom mouthpieces has been my main piece for several years with the exception of a brief foray with a Phil Barone Super New York. Earlier this year, I saw Phil was talking on Sax on the Web Forum about an exciting new project he wanted to work on. I emailed him and found out he was working with Theo Wanne to make an exact copy of the old Florida metal Otto Link mouthpieces. These have long been regarded as some of the most versatile and best-playing mouthpieces out there but you can’t get them any more unless you want to spend a lot of money to get a used vintage one. Phil and Theo wanted to find an excellent example and use modern technology like laser mapping, 3D printing, and CNC milling to make something that was not only great playing and affordable but also consistent – something that even Florida era Otto Links were not.

This idea was exciting to me because I had an excellent Florida Link that was my main mouthpiece for many years to the point that I had to stop playing it because I had used up the bite plate and it had taken a fall and the tip had some issues. Several years ago I started my association with Phil by having him restore this mouthpiece for me. Fast forward to this year and there was actually a good chance that my mouthpiece might be used as the “blank” to get them a starting point. Unfortunately my piece is an 8* and Phil and Theo were looking for a 7* as that was what they wanted to base the line on (it’s one of the most commonly used tip openings especially in Links). Still I was very excited to get my hands on the mouthpiece but several uncontrollable factors like summer vacations and my wife’s illness kept it out of my hands until this holiday season.

The first thing you will notice about the Tribute is just how precise and lovingly crafted it is. The tip and rails are absolutely pristine – a hallmark of Phil’s work and the overall look of the mouthpiece is very attractive with a bead-blasted finish and excellent logo work. I’ve never played a Theo Wanne mouthpiece but I believe this level of build quality is something he is known for as well. There is a gentle rollover baffle, the sidewalls are scooped out and the chamber is large. It ships with a Theo Wanne Enlightened ligature with two pressure plates but the version I tried had no ligature. I ended up using a Francois Louis Ultimate although a Rico H fit just fine also. 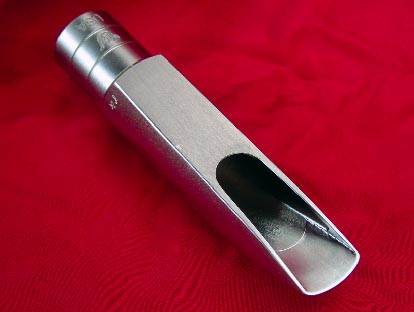 How Does it Play?

Playing the Tribute was easy and fun. As I said, I’m very comfortable with a Florida Link after years of playing one and this was as comfortable as an old friend pretty much from the start. I used Rigotti Gold 3 Strong reeds and they seemed like a pretty good fit. It’s possible I would eventually go with a 3 Medium but I probably wouldn’t go stronger for fear of the mouthpiece sounding too tubby. The best words to describe the sound I got would be full, round, and velvety. It makes you want to play ballads especially ones that feature the low end of the horn because the low notes are absolutely stellar. It subtones like a dream and the sound just filled up my little practice room/studio. You can easily transition from soft to loud and, like other Links, it picks up some pleasing brightness when pushed. Pitch was generally very good and the tone remained centered and even throughout the range of the horn. The only problem for me was that the upper register seemed like it didn’t want to brighten up enough for the kind of music I usually get called to play. Sometimes I could blow harder and it would open and brighten up enough and other times it sounded a little pinched to my ears. This could be the result of the fact that I am used to playing a hard rubber mouthpiece with a much bigger beak as I am much more comfortable with that these days. One thing to keep in mind is that Florida Links don’t all play the same as I mentioned above. Some are darker and some are brighter. My Link is a little brighter than this but it’s also a bigger tip opening. I think this piece tends to be darker than some other Florida Links.

My original intention was to take it out on a gig I had with a soul, R&B band I play with out of DC and Northern VA but I ended up not using it on that gig for several reasons. First off, I could tell that there would be issues with the monitoring situation on stage and I didn’t want to get lost in the mix. If I’m on my usual setup I can find myself sonically even in bad situations but I didn’t have confidence I could do that with the Tribute in this situation. Also, there was another tenor player on the gig and he wan’t just any tenor player. He’s a legend in the area named Al Williams and he’s a flat out player who’s been around with the likes of Stanley Clarke and Mongo Santamaria. I didn’t want to do anything that would potentially keep me from being my absolute best that night. Because of that I couldn’t take the mouthpiece on the gig

I really loved this mouthpiece and under certain circumstances I think I could easily make this my main piece except for two things. First, I don’t really get to play in those types of situations as much anymore. If I was playing more straight ahead jazz in smaller rooms then yes but I tend to play funk, soul, and R&B in loud bars and theaters. Second, I have come to the conclusion over the years that I am just more comfortable on mouthpieces with bigger beaks so that my jaw is naturally opened wider. Metal mouthpieces just don’t have those kinds of beaks and I tend to get fatigued much quicker on them these days as a result. I’m told Phil might be working on a more in-your-face version of this mouthpiece called the Mosaic and that might make me think hard about going back to a metal mouthpiece again but we’ll see.

Clips and a Different Kind of Tribute

If you’ve been reading my blog at all then you know that I haven’t been posting much lately. In my last post I explained that my wife, Sue, was having some rather serious health issues. I won’t go into all of the details here but she finally succumbed to a terrible illness called Fatal Familial Insomnia on December 18th so I now find myself a single dad to my two boys. I miss her very much and that’s reflected in these clips. Both are single-take “moments in time” that I recorded on the evening my wife’s funeral and the following evening. I thought about going back and re-recording or “fixing” some things or even adding some reverb or EQ but ultimately decided that they should stay as raw and original as possible to remain as a record of what I was feeling those nights and many nights since her diagnosis in July. The first is some noodling and then When I Fall in Love and the second one is My One and Only Love – a song I’ve dedicated to her many times over the years. You get to hear them warts and all:

I love you Sue and I miss you more than you can know.