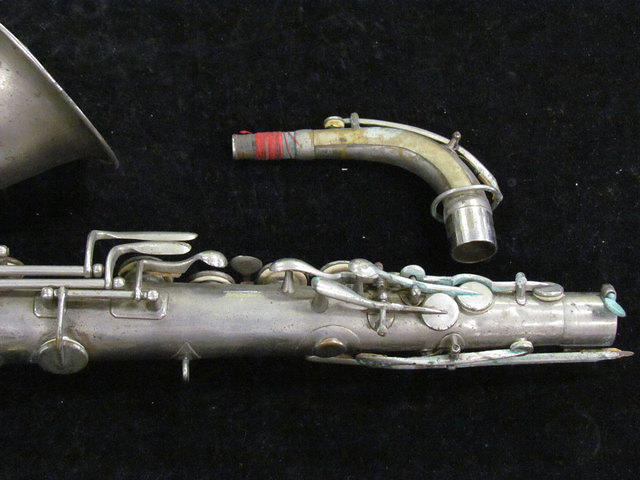 I wanted to take a break from the recording stuff for a little bit but don’t worry I’ll get back to it soon – assuming you’re a fan of course. If you’re not a fan of the recording posts it’s more like, “Oh geez, he’s going to write more of that nonsense?”. But I digress.

A good buddy of mine and an excellent sax player named Scott Paddock posted this video on my Facebook wall a while back. It’s a quick overview of an original Adolphe Sax alto and it’s absolutely fascinating. I mean I’ve seen a lot of vintage horns in my day and some of them had some pretty interesting key work but this is just so bare bones. It only goes down to low B instead of Bb but it does go all the way up to F above the staff. There are far fewer linkages and rods – the left and right hand stacks don’t interact whatsoever. One of the most mind-blowing things is the two octave keys. We actually have two octave keys on modern horns but we access them through the same mechanism and the horn automatically makes the switch for us. On the original horn there is one octave key for D to G# and then another for A and up. I’m sure it’s something you could get used to but it makes me glad for my modern horn.

One of the BIG changes is weight because of the major difference in the amount of keys, posts, and ribs.  I imagine this horn is maybe half the weight of a modern one..especially something like my Buffet or a Keilwerth. I’m also a big fan of the very simple G# mechanism because that’s one of the keys that seems to always stick with the modern mechanism.

When I look at this video I find it fascinating but I also find myself really appreciating all of the advancements that help me play with more facility and probably more in tune. I have an old college buddy named Ellery Eskelin, though, who has made a career out of studying old horns and adjusting his approach to try to make the most out of them – I think his current main horn is from the 1920’s. He posted on my Facebook page about how much he would love to try it and I think he would probably make it sound awesome.

I’ll get back to the recording stuff soon with a discussion of the actual software you can use. I’m also looking forward to some fun shows in February after a very empty January. I have gigs with both Technicolor Motor Home and Jr. Cline and the Recliners and I also am meeting with some great musicians and good friends about starting a recording project that could also turn into a live band. Wish me luck.