It’s a little freaky looking but still kind of cool.

I remember the first time I heard Tom Scott play a Lyricon a very, VERY long time ago.  I was instantly intrigued and I was pretty much hooked on the idea of playing a wind-driven synthesizer even though it would be quite a few years before I even had the chance to start playing something myself.  In the interim I started listening to Michael Brecker playing his early EWI’s and I went out to hear a great local guy named Paul Soroka tear it up on a Lyricon pretty much every week for several years.  Both of them just made me more interested in getting a wind controller for myself.  I finally got the chance when Yamaha released the WX7 in the mid ’80’s.  I had to have one.  My local music store got one in and I went in, tried it, and bought it on the spot even though I was demoing it through a synth that wasn’t set up for breath control at all…of course, I didn’t know that – I was still in heaven.  l picked up a Yamaha TX81Z to use with it so I could use the Sal Gallina patches that came with it.

The TX81Z was a decent place to start but I never sounded like Sal did on any of the patches…maybe because I had no other effects other than the pseudo reverb that was built into the unit.  I soon added a Korg M1 keyboard to the mix and that’s when I started buying patches from Patchman Music – a relationship I maintain to this day.  Matt Black is Patchman and he’s a gifted player and an inventive and knowledgable patch programmer who provides a great value for anyone playing any type of wind controller.  I used these two synths for several years and really started to learn a lot about wind synthesis and using the WX7 in performance.  I did everything from wind-driven solos to helping cover keyboard parts.  Even though I liked playing the WX7, I was drawn very much to the Akai EWI.  Maybe it was because Michael Brecker played one or maybe it was because it was analog like the Lyricon but I had to have one and I finally made the leap with the 3020 and the 3020 module.

The 3020 module was the analog version…they also made a 3030 at the same time that was sample based with more effects.  I kind of wanted to go more analog anyway but the fact that the 3020M was cheaper was probably a deal sealer for me at that time of my life.  Of course, all of that dreaming about an EWI did not prepare me at all for the adjustment of actually playing one.  I had remembered reading how MB had to completely change his way of playing and learn to keep his fingers off the contacts and I can say that if you are the kind of person that keeps your fingers on the pearls, then the adjustment to the EWI will be long and somewhat arduous.  Anyway, I can go more into technique building in another post but for now I will say that for a long time I actually brought out both the EWI and the WX7 using the EWI for more flowing and expressive sounds and using the WX7 for more percussive attacks and for very technical things.  However, keys started to stick on the WX7 and it seemed like time to make the move so I eventually switched to the EWI full time.  Around that time I also got rid of the M1 keyboard and the TX81Z and moved to an M1 rack and a Kurzweil K2000R (also with Patchman patches).  I also switched to an Ensoniq TS10 keyboard but did not use it for wind patches…just as a controller.  This was an incredibly versatile setup for the time.  Finally, I bought an new EWI 3020 and a 3030 module as a backup during this period although it has remained largely unused in that capacity. 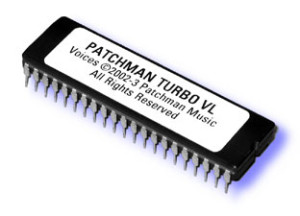 Eventually, I got rid of the TS10 and moved to a less expensive and lighter Yamaha CS1X but that sits at home in the studio now along with a lot of other gear.  I added a Yamaha VL70m which is just about the holy grail for any wind controller player.  It used advanced physical modeling so you can easily emulate a wide array of woodwind, brass, string, and analog synth sounds.

I started with Patchman patches but eventually upgraded by swapping out for the Patchman Turbo chip (an aftermarket mod for the VL70m that adds custom banks designed by Matt) and that was one of the best purchases I ever made.  So by then my rack was down to just the K2000R and the VL70m and the then newly-released EWI 4000S which didn’t require a module to convert to MIDI and also had built-in sounds.  The rig was incredibly flexible and musical and I had a really high level of comfort with making my own sounds in that environment.  Unfortunately, the display on the K2000R started to get dimmer and dimmer until it was practically unreadable and I knew the time had come to put the old workhorse out to pasture (in the studio or what passes for a studio at my house).  I made that decision in no small part because the thing is big and HEAVY…three rack spaces and super deep.

After a lot of research I decided to replace it with the Roland XV5050 since it is both lighter and still capable and expandable (oh yeah, and it also has Patchman patches installed – I’m sensing a pattern).  I bought an Alesis Quadrasynth+Piano rack at around the same time (used from Patchman and of course I installed his patches) with the intention of adding it to the rig but I never pulled the trigger on that even though it’s actually a great wind controller synth. 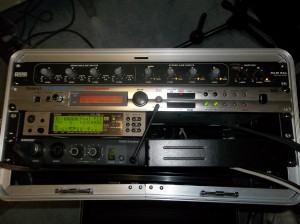 Also in the rack are a mixer and my wireless in-ear unit. It’s all pre-wired and it’s on wheels so set up and tear down is a breeze.

This was my last hardware setup before switching to my current rig which is entirely software based and probably something for me to talk about in another post.